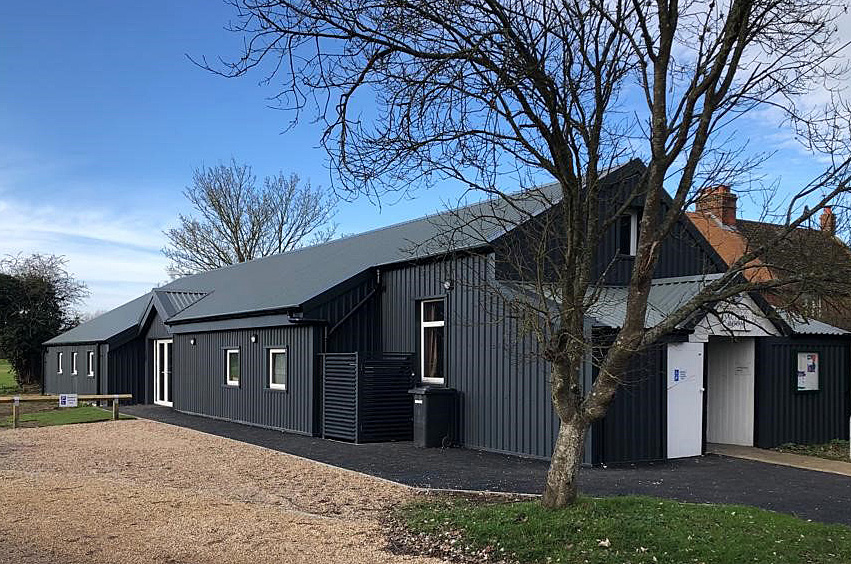 Now is the time of year when we reflect on the past year and contemplate the coming one and what it might have in store for us. So, with everything going on in a world dominated by the COVID-19 pandemic, I thought it would be good to finish the year with a tale with a happy ending.

As many do these days, this tale starts with an email, which dropped into my inbox on 8th February 2019. It was an enquiry from a past Welbro customer who wanted to know if we would be interested in a similar project to their’s in a nearby village. Having successfully refurbished the Curridge Women’s Institute hall, one of the trustees wanted to know if Welbro was interested in a similar project in Bucklebury.

We were, and on 28th February 2019, I met the trustee from Curridge and two of the trustees from the “Victory Rooms” in Bucklebury. We met in the cold hall, which had a lot of character but looked all of its one hundred years plus age. It was a typical old village hall complete with a raised stage and clad internally entirely in dark stained tongue and groove timber. 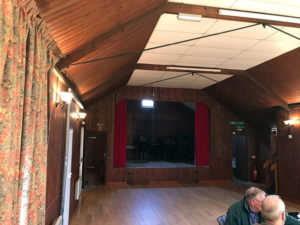 It was clear that this building was the centre for a wide variety of activities within Bucklebury, from the junior football team to the seniors’ clubs and societies.

No one was certain how old it was. It is reputed to have been at its current location since shortly after the Great War. Although some say, it was moved here from another site.

The time was right for a bit of modernisation. A very low, cold lean-to at the rear of the building housed the toilets, and the galley-style kitchen was the slimmest you have ever seen. Add a stage that was scarcely used but occupied a significant amount of space, and it was clear that the hall was not meeting its full potential. 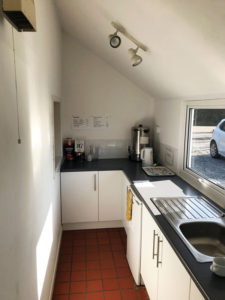 It was clear from this initial meeting that it was not financially viable to demolish and rebuild the hall, so our brief was to consider the refurbishment of the existing envelope and the possibility of building a new extension to the rear of the hall. 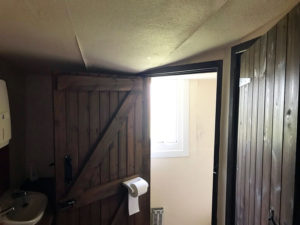 We prepared and submitted an outline specification of works and an overall budget in May 2019, which gave the committee an idea of what we could do and roughly the overall cost. The committee had already made considerable fundraising efforts, and now they knew how much more they needed to get their hall modernised. 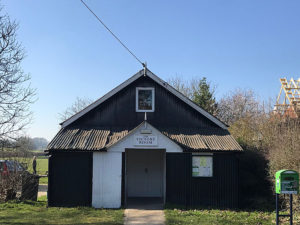 In August 2019, with more fundraising completed and donations pledged from various charities, the committee called Welbro back to re-visit the specification and firm up the budget costs. It was apparent that the best way forward would be to refurbish the existing hall, including removing the stage and building a new extension at the rear.

We presented a more detailed specification, with a series of optional extras and some firmer prices in October 2019. Included in the prices were the costs to prepare structural designs for the proposed extension and drawings for planning approval with East Berkshire Council. In addition, part of the specification was the conceptual design for the union of the existing hall and the proposed new extension. We decided that it would look best to create a single ridgeline for both the extension and the existing roof.

This design would require us to increase the height of the existing vertical cladding and adapt the existing roof structure of the hall to create a shallower pitch to match the new extension’s roof. 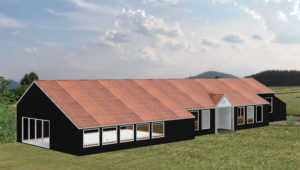 In February 2020, the hall committee commissioned us to produce design drawings for planning approval and engaged a structural engineer for the extension design after further fundraising and pledges. The concept was taking shape.

By early March 2020, a little over a year from our first meeting, we had submitted plans and designs, agreed upon the concept and were now concerned about material supply and price rises post-Brexit. The industry had changed; the standard lead-in time for profiled metal sheets was no longer two to three weeks. Instead, suppliers were quoting ten to twelve weeks, with significant price increases imminent and further ones expected soon.

Having already made a tremendous effort fundraising thus far, the committee was getting very concerned about price rises and delays. However, no one expected COVID-19 and the disruption it caused, starting with a total nationwide lockdown on 23rd March 2020, just a couple of weeks after we submitted our plans.

There is no need to dwell on the lockdown; we are all aware of what happened, so we fast-forward to March 2021, a little over two years since our initial meeting in the quaint but cold village hall. With planning approval agreed, final finishes and designs selected and following a successful competitive tender bid submission, Welbro signed a JCT contract to refurbish the Victory Rooms at Bucklebury. The committee agreed and signed off the final account on 15th November.

They say all good things come to those who wait. So, after a challenging journey, magnificent fundraising efforts and productive summer of refurbishment works, Bucklebury’s residents have a new shiny and impressive village hall. 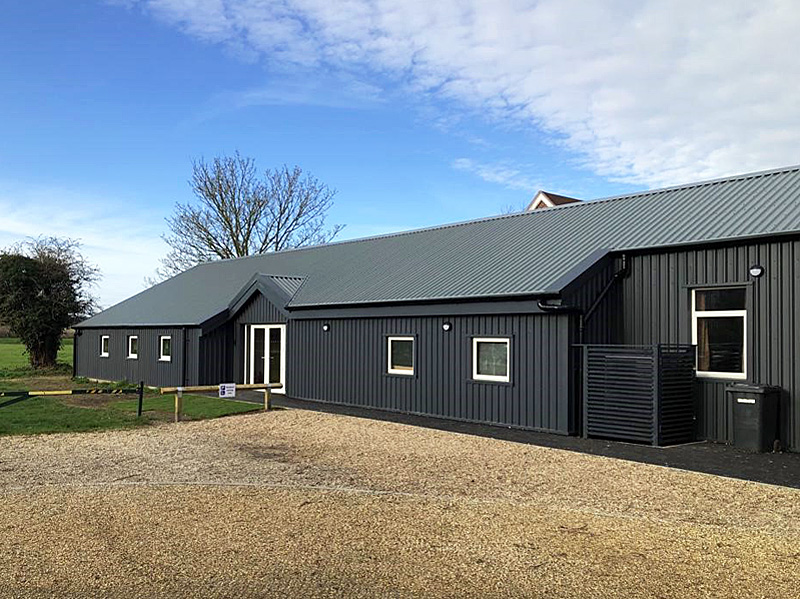 The old stage area is gone, and during the design process, we decided to use the new extension as the hall space and fit out the old section with the new toilets, kitchen, storage areas and a small meeting room.

The committee engaged a specialist to install a ground heat source pump, which, combined with the insulation built into the new roofing and cladding, gives the hall excellent green credentials. The kitchen area is now spacious and modern. There are brand new toilets including facilities for disabled people. 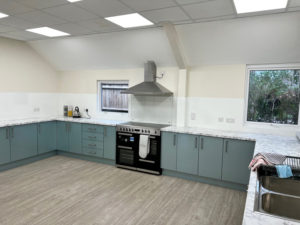 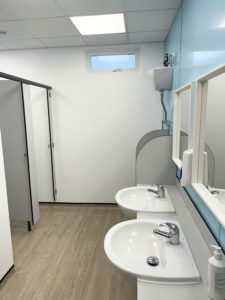 The new hall area can accommodate up to eighty people sitting at round tables, which was impossible in the old hall. As a result, the Victory Rooms’ bookings have increased by 100% of pre-pandemic levels, clearly a popular venue for local events and activities. 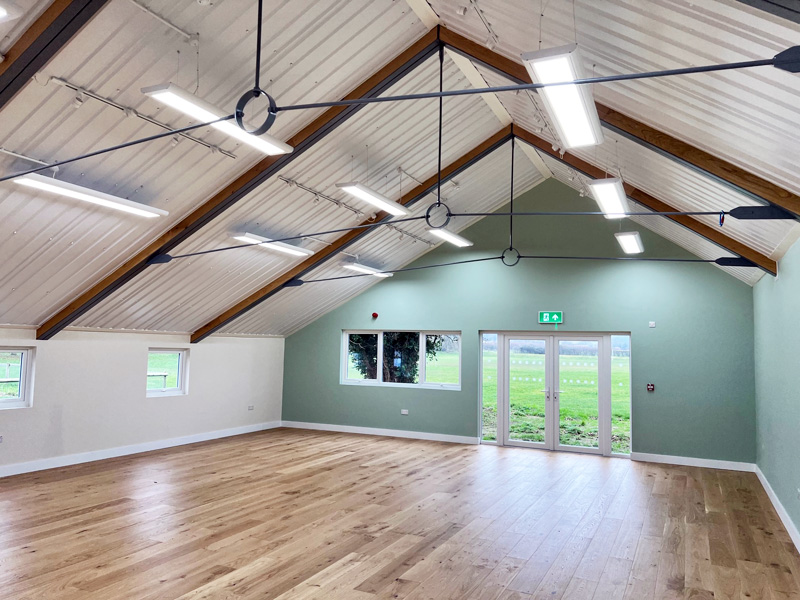 There you are, as promised, a tale with a happy ending!

Here are a few before and after shots 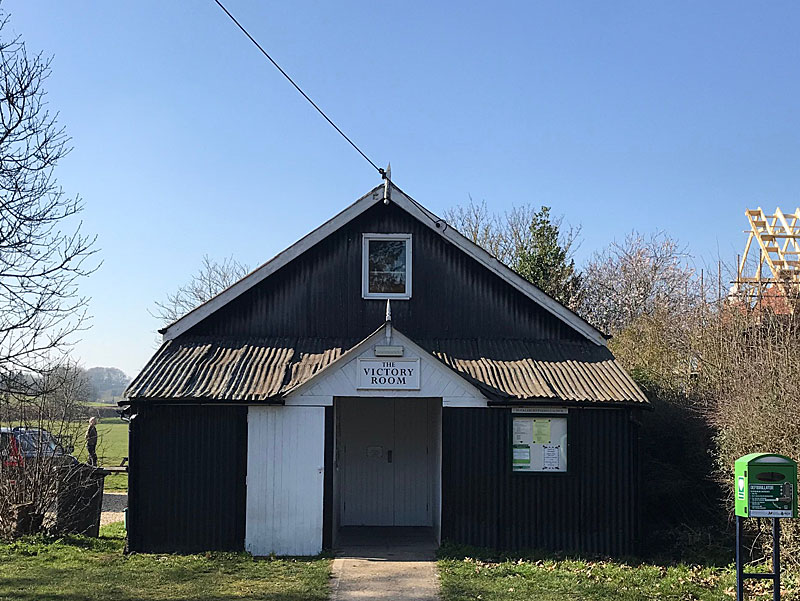 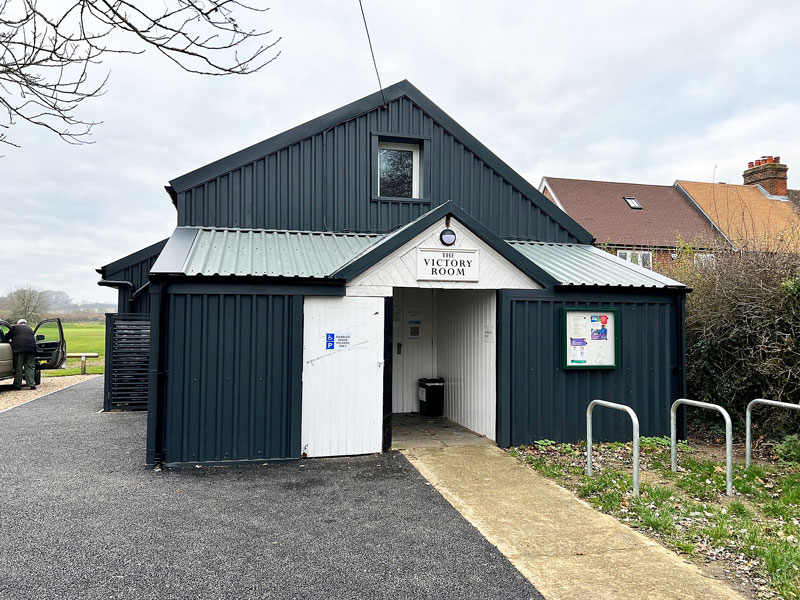 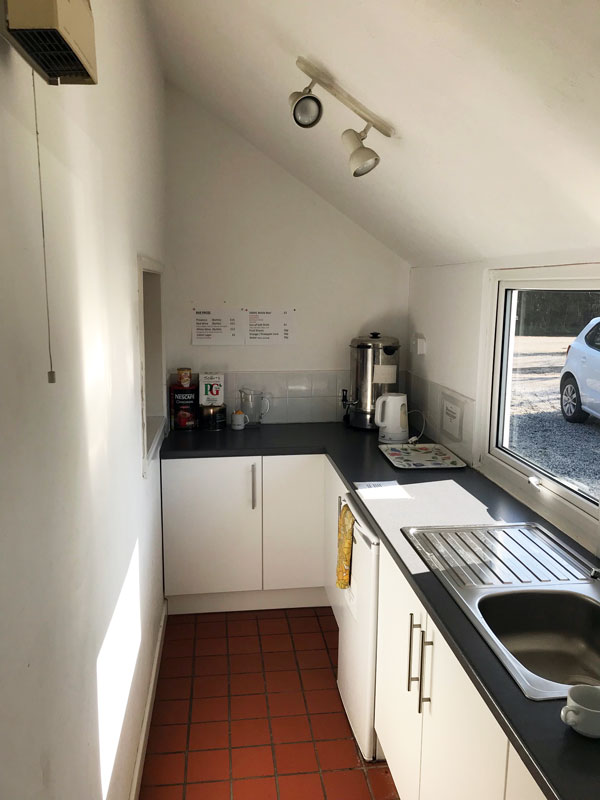 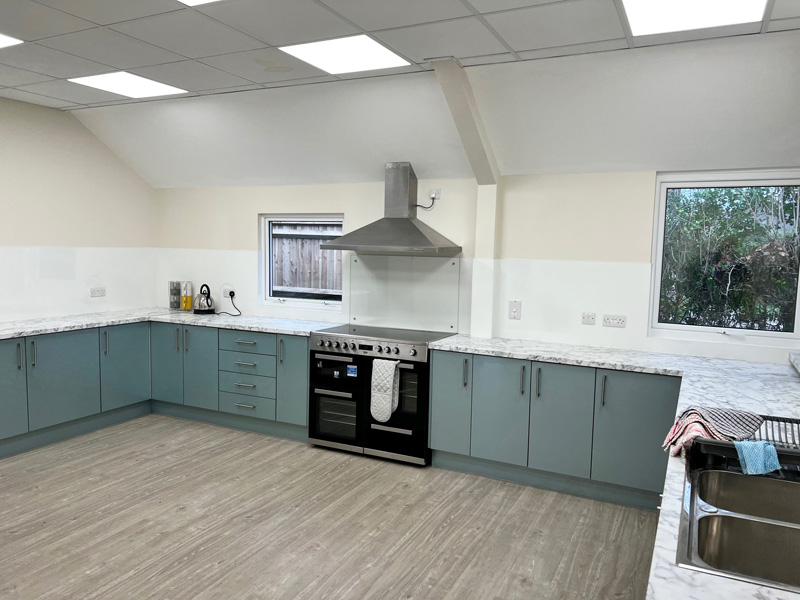 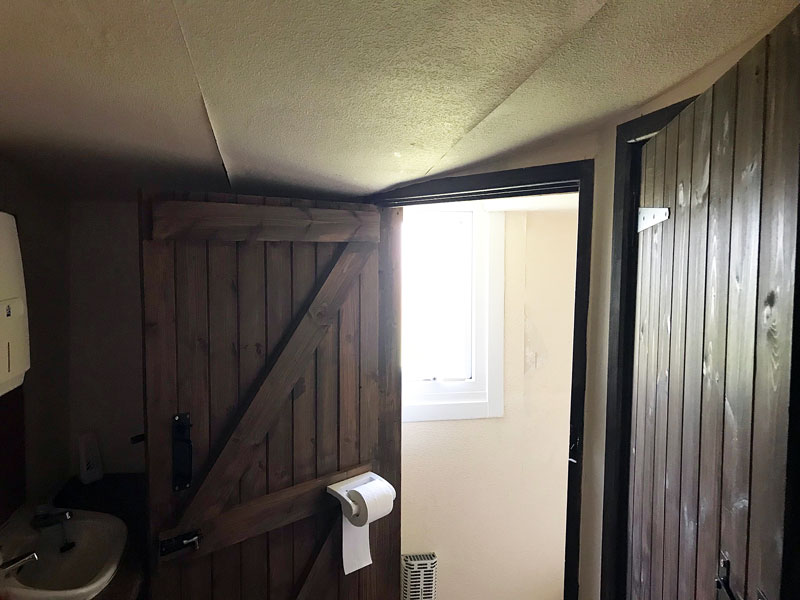 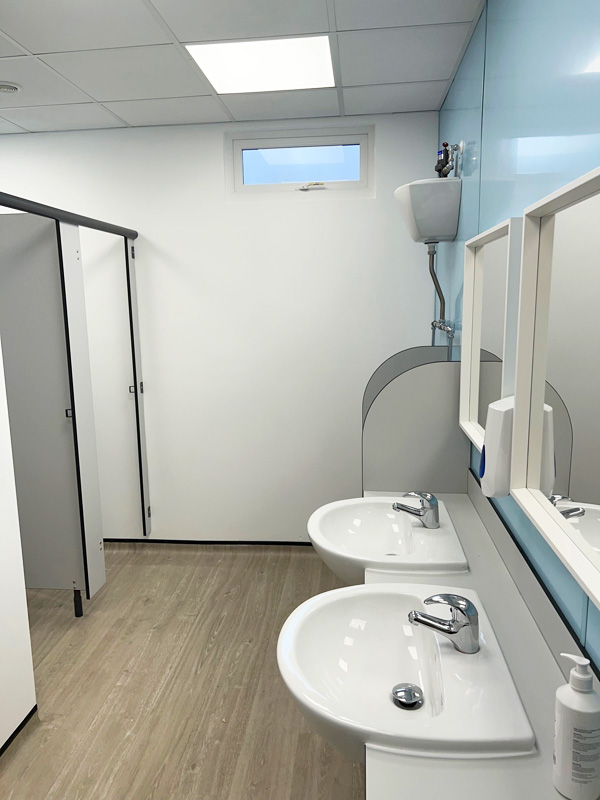 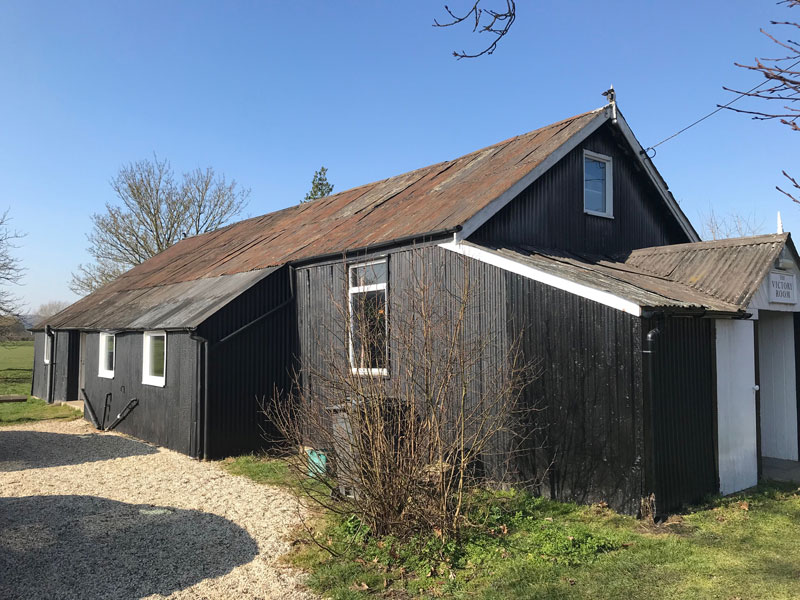 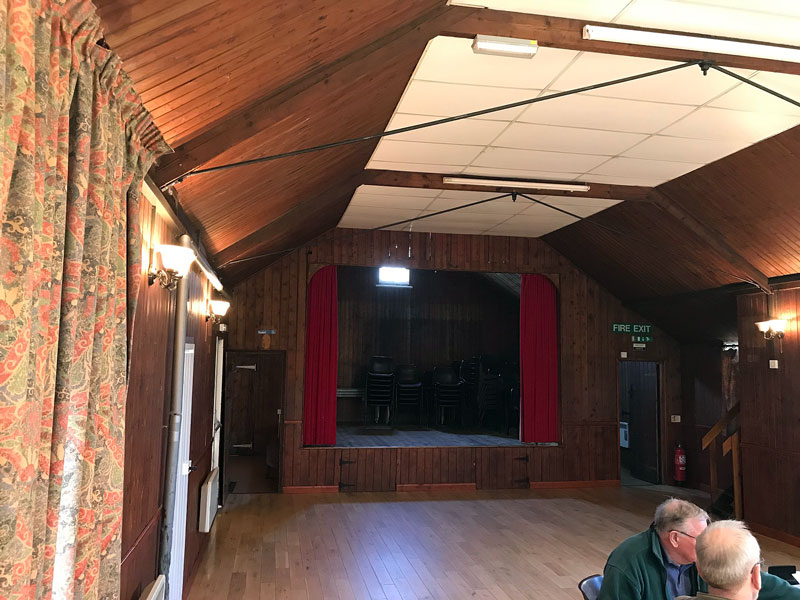 And finally the extension