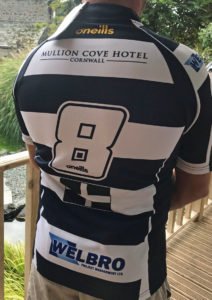 Welbro is pleased to announce their sponsorship of Helston RFC. Helston RFC is a rugby union club in Cornwall which has been in existence since 1965. They currently play in Cornwall League 1, following promotion from Cornwall League 2 in 2017–18. Following a successful bid for a major refurbishment project in Helston Welbro were approached by the club to see if there was any interest in supporting the local rugby club.

With many rugby enthusiasts within Welbro, the Chairman amongst them, the company is happy to support the club with kit sponsorship. Over the years Welbro has sponsored a number of junior football teams and minis rugby teams but this is the first time that our support has been given to a senior side. The whole Welbro team wishes Helston RFC a very successful season.

About the Graham Alexander